Updated to inspire a new generation after LASPO 2012 (the criminalisation of squatting in residential property) and other changes. Packed with more information, glossary and index for easier use.

A bargain at £2 (arrangements for bulk purchase / squat type groups).

See Squatters Handbook page of this website for full info.

A few days ago the former Camelot Europe HQ, in Westland Park London N1 was squatted in protest against guardian companies’ anti-social profiteering from empty properties and homelessness.

For those who don’t know, Camelot are the original “guardian” company, invented to counter the squatting movement in Holland by moving in people who act as security by living there. Guardians pay rent but have less protection than ordinary tenants, at least according to the wording of their contracts. Other guardian companies also exist, such as our least-favourite Dot Dot Dot ……

A couple of articles have appeared in the Guardian but with certain problems. Both of them seem to agree with Camelot that what the people acting as security guards by living in their properties are is merely licencees, when most legal advice shows that they clearly have tenancies. When challenged on this point most guardian companies back down and come to a deal, rather than allow the issue to go to court.

On Monday 26th Camelot security guards tried to besiege the building, agreeing to let people out but nobody and nothing in. Over a period of days the situation ebbed and flowed, with police from the station a couple of minutes away getting called out regularly to referee a stand-off between security and supporters of the occupiers. At one point the besiegers themselves got besieged. They were allowed to leave but not get back in.

A couple of times the police imposed exclusion orders but only for a while. The last straw for the cops was when security tried forcing entry during the night and they were finally told to leave and that had to get a possession order to get the occupiers out.

Advice from ASS is that if you squat somewhere with an entranceway between the door and the public highway you need to take control of this space.

Four years ago today, squatting in empty residential properties became a criminal offence in England and Wales, with the introduction of section 144 of the Legal Aid, Sentencing and Punishment of Offenders Act (2012). Since then many young and homeless people have felt the effects of the new law, and squatting itself has become an ever more precarious housing option, with:

While squatting has become tougher, all is not doom and gloom. There have been many successful squats and occupations, including residential buildings, and squatting continues in commercial properties, albeit on a much smaller scale and less visibly than before. Just a few months ago squatters stopped the sale of a council house in Avonmouth by squatting the residential building for six weeks, and in Loughborough Junction, Mornington Crescent and Russell Square, squatters successfully resisted their evictions by High Court Bailiffs (no mean achievement). But the constant moving from one property to the next is wearing people thin.

The pressure on squatting, caused by the new law, means that many homeless people are no longer able to turn to 600,000+ empty houses in England & Wales for shelter. Instead, they have been forced onto the street, or into exploitative license agreements with property guardian companies.

And even though section 144 is exacerbating the housing crisis, back-bench politicians from both major political parties have been calling for an extension of criminalisation to commercial buildings; in July this year, Labour MP Dawn Butler (Brent, London) asked the Secretary of State when he was planning on bringing forward such legislation.

Therefore Squatters Action for Secure Homes (SQUASH) is calling for a repeal of section 144 of the Legal Aid, Sentencing and Punishment of Offenders Act (2012), and an extension of rights for people squatting empty buildings, through frameworks like the “Convention on the Use of Space”.

What You Can Do

SQUATTERS have occupied a house in Bristol in protest at its imminent sale.

The terraced house in West Grove, Montepelier, was due to be sold by owners Knightstone Housing Association at an auction tonight.

Police are currently outside the building, which now has protesters on the roof.

Ben Richie from the squatters group Bristol Housing Action Movement, which works with housing campaign group Acorn, said the squatters had moved in to the house, near the Star and Garter pub, late this afternoon.

He said: “It started a couple of hours ago, there’s 2-3 people in the building.

“We’re concerned over the auction tonight. It’s a Knightstone Housing Association property and were concerned about the loss of social housing in the city.”

The protesters have told police they are staging a political occupation against the city council for auctioning off housing stock.

Mr Richie said: “We believe the council has offered a one-to-one swap of a property (to Knightstone), meaning the loss of one council house.

“By occupying it were hoping it can’t be auctioned off and therefore stopping privatisation through the back door. This is an area which is much sort after area.

Neighbour Sarah Jamieson said the house had been used for social housing for “20-odd years” but had been empty for more than a year since the previous tenant died.

Ms Jamieson said: “I’m overjoyed, because I know they’ve been selling houses off.

“The social housing around this area is diminishing.

“I was angry when I heard it was being sold off. Fiona, who lived there, would have been so upset.

“It was a family home and it should stay that way.”

The house was due to go under the hammer this evening, in a sale organised by Auction House Bristol & Somerset North at Ashton Gate stadium.

Described as “flexible accommodation” which could be used as a three or four-bedroom home and is in need of modernisation, the auctioneers said: “The property is situated in popular Montpelier, with its range of cafes bars and restaurants situated throughout the area, including Picton Street and Stokes Croft.”

UPDATE 9.20PM: Police went into the house to remove those inside but were unable to reach two squatters on the roof. Officers remain at the scene.http://www.bristolpost.co.uk/watch-squatters-occupy-bristol-home-in-protest-at-social-housing-sell-off/story-29513868-detail/story.html

the ASS email appears not be sending properly, especially with attachments

so if you were expecting a response from us and don’t get one, give us a call

we do normally reply

On 20th April 2016 a group of campaigners squatted a council house in Avonmouth to stop it being sold. 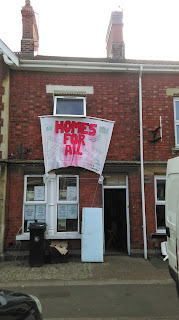 In March 2016 the then Mayor of Bristol, George Ferguson, announced 15 empty council residential properties were to be sold at auction.  Ferguson said the money raised would be invested in current council stock and 75 council homes then under construction.

The sale of council houses while homelessness in Bristol is at crisis point was controversial.  With a mayoral election on 5 May 2016 and all the other candidates opposing the sale there was also a question of democratic accountability.

On 20th April – the day of the auction – 44 Richmond Terrace in Avonmouth was squatted to try and prevent it being sold.

It was auctioned anyway and the buyer was not told the Council did not have vacant possession.

The Council now had 28 days to gain possession of the house and complete the sale.  They asked the police to evict the squatters.  The police refused as the occupiers were not living in the building and were therefore not breaking any laws.

The Council then did nothing, unable to make any decisions until after the mayoral election on 5th May.  This was won by the Labour candidate, Marvin Rees, who had pledged to review council house sales.

After the election the Council again asked the police to evict the squatters.  The police again refused.

The Council then issued a claim for possession in the County Court, with the hearing on 25th May.  At the hearing the Council was awarded full possession entitling them to evict the occupiers.  Unusually the court order specified the eviction had to happen before midnight on 1st June.

The Council attempted to evict at 5.30am on Tuesday, 31st May.  However they had completely underestimated the occupiers who had heavily barricaded the building and built a roof platform.  It would take a substantial team of qualified and properly equipped climbing bailiffs to evict the squatters.  The Council attended with about four contractors, a County Court bailiff and a council officer.

After causing minor damage to the front door and waking the whole neighbourhood up with pointless banging the Council gave up on the eviction attempt.

Meanwhile the squatters were in contact with the buyer who now wanted to withdraw from the sale.  She’d found out the property required about £30,000 of repairs that the Council do not appear to have fully disclosed.   Her solicitor had served a notice to complete the sale on the Council, expiring on 7th June (or thereabouts).  After that the sale has failed and the Council has to return her deposit and pay compensation.

On 1st June the Council’s court order timed out.  They met with the buyer and agreed to release her from the contract.  The sale had now failed.

With the house no longer being sold and a new Mayor opposed to further council house sales the occupiers handed possession back to the Council on Monday, 6th June.

Friday 10th June Freedom building monthly social from 6pm until 9.
(then later there’s an Oi Poloi benefit for continuing the beach trespass they did recently at T Chances, not that anyone else needs to raise money to party on the beach!)

Saturday 11th June 2-4 Squatting in the Netherlands: Talk by ETC Dee at Decentre (downstairs from ASS)

Gràcia: A Community Fights Back 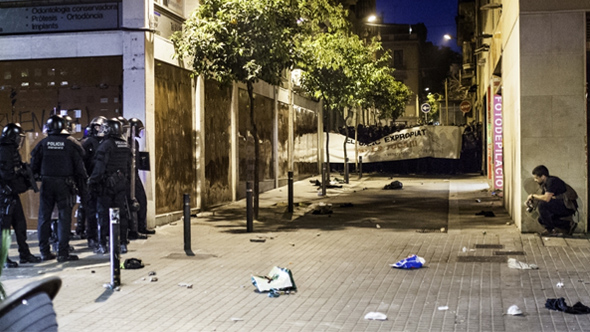 Didn’t they learn anything from the attempted eviction of Can Vies two years ago, and the popular response that ensued? Have they not yet understood that when you attack the autonomous fabric of a neighbourhood in a city like Barcelona, it will cause the underlying the social, political and economic contradictions to erupt?